skip to main | skip to sidebar

Starting A Foreign Business in China

How do we start a foreign business in China?  That was the question we were asked by two foreign investors.  They wanted us to find out the answer to that question.  They also wanted us to help them get their dream business started in China.  When they first talked to us about their goal, it was still just an idea.

They were a husband and wife team from South Africa that had been living in China and teaching English for three years.  Their dream was to eventually build their own English school, and provide good quality English lessons.  They decided that they wanted to open their first school here in Shenyang, the city where we are currently located.  They had been planning carefully and saving money during their time teaching in Shenyang, China.  During their three years of teaching, planning, and learning, they realized that it was absolutely necessary to have the right relationships with local Chinese business people in order to make their dream come true, and to be successful as foreigners in China.

Through local contacts, they found me.  After getting to know me for a short period of time, they realized that my relationships in China were exactly what they had been looking for to get their dream started.  They saw that my relationships in China were a very nice mix of family, friends, business contacts, and local government contacts that had all been developing for over 12 years.  They decided it was time to pull the trigger and commit to beginning their dream project.

We negotiated the business arrangement that we would have with the foreign investors in such a way that we would become their partners.  They would hold the large majority of ownership and run the business themselves, and we would retain a smaller percentage of ownership, and in return, we would get their business and location up and ready for the grand opening, and utilize our family and business networks in China to provide ongoing management assistance and management of relationships with the local communities and regulatory agencies.  We would be their conduit to the Chinese communities and business opportunities, and help them bridge the cultural gaps necessary to make their business operations successful.

Our initial task was to perform market research.  Since our new partners were dead set on starting their new English school in China, our research also included finding the best location for their new business and talking with various commercial property owners in different areas of the city.  Shenyang is a large city, so there was a lot of ground to cover.  Many foreigners might think finding a commercial location is as easy as doing a quick search on Google and then calling the numbers in the online property rental and sales ads.  Unfortunately, it's not that easy in China.  It's possible to use the internet to search for properties, but you won't accomplish much without doing it in person.  We knew the only way to do it right, was to put our feet on the ground and walk the city streets searching for commercial rental space.  We did try using the internet at first, but only a small percentage of available properties are listed online, and the ads we did find either contained inaccurate contact info, or the pricing and details about the rental space were wrong.  Many of the ads for commercial properties contain misleading information, just to get you to call.  The only way to get reliable information is to do it in person, which takes a lot of time and effort, but either way, it's necessary.  Even though we worked the streets in person, and mostly on foot, we still encountered setbacks when negotiating with property owners and managers.  During the negotiations, we would bring the price and details to an acceptable level, but as soon as they realized that foreign business people were involved, then some excuse would pop up, and the price or some other detail would change, and not in our favor.  We had to work hard and creatively to keep the knowledge of foreign owners hidden until all negotiations were final, and most importantly, until the top decision maker associated with the property, approved the pricing and details of the lease agreement.  After dealing with several property owners, and having our deal fall apart a few times with a few property owners as soon as they realized they might be able to get more money out of foreign business people, we finally found the right location with the right property owner.  That process took over two months of daily work, traveling all over the city and dealing with many property owners.  After we finalized the negotiations with the best property owner, it was time for our South African partners to put down a deposit on their new business location.


After our partners signed the lease agreement and paid the lease fees, it was time to begin "decorating".  In China, when they talk about decorating a new home or business office, it often does not mean the same thing as it would in an English speaking country.  When they say decorating, what that translates to is more accurately described as interior construction.  In this case, the main outer walls and ceilings were already built and had an initial coat of paint on them.  The inner electrical wiring and plumbing for water were also already complete, but that was about it.  The interior construction that was still needed was quite a lot.  It still required building interior walls, installing flooring, installing the sink and toilet in the bathroom and tiling the bathroom walls, and much more.  So the next task was to find and negotiate with construction contractors.


Dealing with and negotiating with property owners and construction contractors is not easy for foreigners in China.  We have done it many times, so we are comfortable with the process, especially since my wife and her family are Chinese, and well connected throughout Shenyang and surrounding cities.  Since my family has government and commercial contacts, that allows us to tap into essential networks all over China.  We know that we can effectively help clients set up businesses, offices, warehouses, factories, etc, all over China.

Working with the construction contractors was a full time job.  We had to make sure that someone was always there, every day, checking on the progress and making sure that things were done correctly.  For example, one day that my wife and I stopped in to check on the progress, the contractors had the wrong type of toilet ready to be installed.  We previously specified that it must be a western style toilet, but what I saw sitting on the ground, still packaged in a box, was a Chinese style squat toilet.  If we had not stopped in for one day, then they would have installed that squat toilet, and we would have had to argue with them to uninstall it, return it, buy the toilet that we previously specified, and then install that one.

Every aspect of construction is like that here in China.  The contractors make assumptions about what the customer might want, and move forward without first consulting with their clients.  The clients must always be present, or have someone they trust be present, or at least check up on the construction every single day.  It's a must if you want to keep your project on schedule and avoid huge delays.  Every single aspect of doing business in China requires in-person management.  It's the only way to get things done the right way.  Relationships are more valuable than money, when it comes to business in China.  It's just the way it is.  Foreign businesses and business people that submit to this truth, succeed much faster than those that try to resist the deeply rooted cultural norms in China.  I guess that could also be said about almost any country, and so it should be a rule to live by for international business professionals.  Play by the local rules and customs in every location you are conducting business.  It seems like an easy rule to live by, but I think the challenge can show up during those times when our own deeply en-grained cultural norms conflict with the deeply en-grained cultural norms of our international partners and clients.  It becomes very beneficial to develop the skill of being able to see past your own cultural upbringing, and to more effectively see things from the point of view of your international clients and partners.

One month later, after several small disappointments and many readjustments, the interior construction was completed.  Watching the exterior light-box sign with the business name and logo on it, being lifted up to the top of the front side of the building, was a very satisfying feeling.  Even more satisfying was being able to push the light switch on, and watch the sign light up for the first time, illuminating the front entrance to our new business.  Of course, there were still many more things to be done, and at this point, it all centered around preparations for the grand opening ceremony.

The grand opening did not go off without a hitch.  There were the usual, expected delays and setbacks that occur with the opening of any business, and in any country and location.  Not knowing how to deal with those setbacks and how to make the necessary adjustments in a foreign country can create serious problems for a new or existing business, but especially for a new business.  With the help of many people, including my family members, our partner's friends, and some key business and official contacts, we all pulled it off.  The grand opening was a success.

Within the first week after the grand opening, we already had several prospective new students, with some of them committing to one year of English Language Lessons.  The new business was off to a great start. 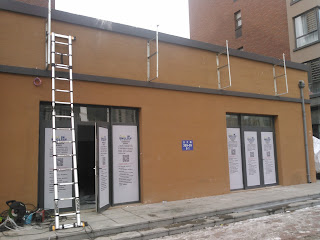 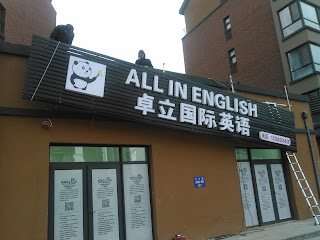 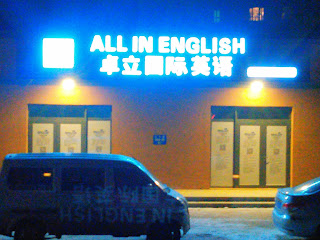 Starting a foreign business in China is not easy, but with the immense amount of opportunities that exist in China's growing economy, it can be a very lucrative endeavor.  The Chinese government has just recently taken steps make it easier for foreign businesses to operate and invest in businesses within China.  The opportunities for opening a business in China are now bigger and more attractive than they've ever been before.  If you are interested in learning about the possibility of opening your existing business, or a brand new business in China, please feel free to contact me.  My contact information can be found on the contact page of our website.  www.GlobalQInternational.com or on our Facebook page, www.facebook.com/GlobalQueLLC

Posted by Thomas Barto at 11:28 AM No comments:

Thomas Barto
Co-Owner and Managing Member of Global Q International, an International Trade Agency with members in the USA, China, and Dubai.